Pure Data is great for generating sound and is used quite often in HCI for this reason. I’ve previously written about how it can be used for creating tactons as well. This post shows a simple patch which receives messages from a local socket and parses the input. As a Pure Data newbie I found documentation to be pretty poor so I’m hoping this helps others see how to easily integrate pd~ with other programs using sockets. 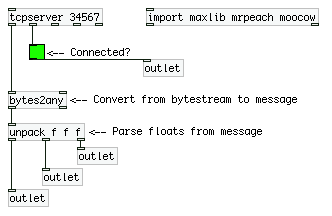 First the tcpserver object creates a TCP server which listens on the given port number (34567 here). The first outlet has incoming messages; the second has connection status. The bytes2any object takes a bytestream and creates a message from it. As an example of how to parse information from these messages, the unpack object here parses three floats from messages. This patch has four outlets: the first three are the parsed floats, the fourth is connection status (True when a socket is connected to the server).