In recent projects I’ve been using Pure Data for generating Earcons and Tactons; I’ve written more about generating Tactons with Pure Data here. I’m sharing these here in the hope that they’ll be useful to someone – if you use or adapt them, I’d be very interested to hear what cool things you’re doing with them!

Everything is on github: https://github.com/efreeman/pd-earcons-tactons

We used 150 Hz for all sine waves as this was the resonant frequency of our actuator; change values as needed. Duration can be altered from 1000 ms too.

This is essentially a dumb patch which generates sound on demand. It’s easier to have greater control over feedback in a more expressive programming language. Using sockets is a nice low-cost way of communicating between Pure Data and other applications. 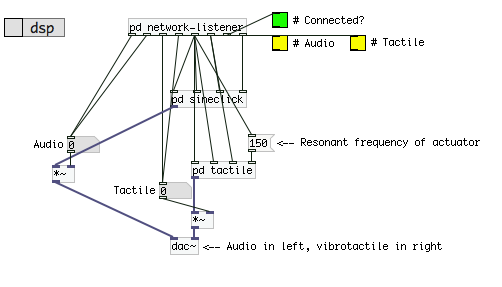 Source here. This patch generates an enveloped tone using parameters sent over a socket. As in my other patches, the TCP socket is on localhost port 34567; this can be changed in the network-listener sub-patch. Here I’ve used the left and right channel for different types of tone: audio in the left, vibrotactile in the right. The right channel is at a fixed frequency to drive an actuator, whereas the left channel can vary tone frequency. Audio and tactile feedback can be enabled/disabled on demand. Message protocol:

As an example, “100 500 440” produces a 1100 ms-long tone at 440 Hz; it takes 100 ms to reach full amplitude, is sustained for 500 ms and then returns to zero amplitude after a further 500 ms. If you wish to further specify the sustain time, change the arguments passed into vline~ in the sineclick sub-patch.