In two studies, described in my ICMI ’14 paper [2], we looked at how above-device interfaces could give tactile feedback. Giving tactile feedback during gestures is a challenge because users don’t touch the device they are gesturing at; tactile feedback would go unnoticed unless users were holding the device while they gestured. We looked at ultrasound haptics and distal tactile feedback from wearables. In our studies, users interacted with a mobile phone interface (pictured above) which used a Leap Motion to track two selection gestures.

Our studies looked at two selection gestures: Count (above) and Point (below). These gestures were from our user-designed gesture study [1]. With Count, users select from numbered targets by extending the appropriate number of fingers. When there’s more than five targets, we partition targets into groups. Users can select from a group by moving their hand. In the image above, the palm position is closest to the bottom half of the screen so we activate the lower group of targets. If users moved their hands towards the upper half of the screen, we would activate the upper group of four targets. Users had to hold a Count gesture for 1000 ms to make a selection.

With Point, users controlled a cursor which was mapped to their finger position relative to the device. We used the space beside the device to avoid occluding the screen while gesturing. Users made selections by dwelling the cursor over a target for 1000 ms.

For a video demo of these gestures, see:

In our first study we looked at different ways of giving tactile feedback. We compared feedback directly from the device when held, ultrasound haptics (using an array of ultrasound transducers, below) and distal feedback from wearable accessories. We used two wearable tactile feedback prototypes: a “watch” and a “ring” (vibrotactile actuators affixed to a watch strap and an adjustable velcro ring). We found that all were effective for giving feedback, although participants had divided preferences.

Some preferred feedback directly from the phone because it was familiar, although this is an unlikely case in above-device interaction because an advantage of this interaction modality is that users don’t need to first lift the phone or reach out to touch it. Some participants liked feedback from our ring prototype because it was close to the point of interaction (when using Point) and others preferred feedback from the watch (pictured below) because it was a more acceptable accessory than a vibrotactile ring. An advantage of ultrasound haptics is that users do not need to wear any accessories and participants appreciated this, although the feedback was less noticeable than vibrotactile feedback. This was partly because of the small ultrasound array used (similar size to a mobile phone) and partly because of the nature of ultrasound haptics.

A more detailed qualitative analysis and the results of both studies appear in our ICMI 2014 paper [2]. A position paper [3] from the CHI 2016 workshop on mid-air haptics and displays describes this work in the broader context of research towards more usable mid-air widgets.

A Pure Data patch for generating our tactile feedback designs is available here.

My full paper, “Tactile Feedback for Above-Device Gesture Interfaces: Adding Touch to Touchless Interactions”, was accepted to ICMI 2014. It was also accepted for oral presentation rather than poster presentation, so I’m looking forward to that!

The following video (including awful typo on the last scene!) shows the two gestures we used in these studies. 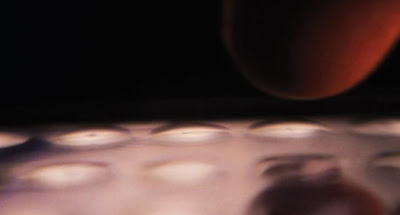 Tactus have gotten quite a lot of attention recently after demonstrating their new touchscreen technology (pictured above; image source). Their “Tactile Layer” technology raises bubbles on the touchscreen, creating, essentially, physical objects on the touchscreen. I suppose I’ve taken quite an interest in this since it’s similar to something I wrote about 6 months ago: feelable touchscreens.

Here are two amazing and innovative technologies, each taking a different approach towards creating tactile sensations from a touchscreen. Senseg use small electric currents to stimulate the skin, creating edges and feelings of texture, while Tactus actually create something physical.

To the best of my understanding, Tactus’ technology allows bubbles (I’m reluctant to call them buttons; who knows what else interaction designers could do with this!) in pre-determined locations, configured during manufacture. Different configurations are possible, apparently, but from what I’ve read it seems that these are decided at manufacture. Whilst this allows some fundamental improvements to the touchscreen experience (e.g. providing a configuration for a keyboard), it lacks some flexibility as manufacture determines where bubbles can be used.

Senseg’s tech, however, is more flexible and appears to be truly dynamic; application developers can control the precise location where feelings can be experienced rather than this being decided during manufacture.

Having dabbled with Microsoft Surface over the past year I’m pleased to see that both of these technologies apparently scale well to larger displays. Interactive tabletops suffer from the same loss of tactile feedback that touchscreen mobile devices do although this is perhaps less apparent on a large scale device where widgets aren’t crammed into such a small space.

I don’t think it’s fair to ask which of these technologies is better, because they can’t fairly be compared. Although the flexibility of Senseg vs the physical tactility of Tactus is an interesting comparison, I feel that a better question is could these concepts be somehow combined? Imagine a touchscreen which offers complete configuration flexibility, a richer tactile experience like Senseg claim to offer (e.g. feeling texture, not just the presence of something) and the benefits of feeling something physical on the touchscreen. Now that would be awesome.

This post is the first of two which gives a brief introduction to creating multimodal interactions in Android applications. I’ll briefly cover some of the SDK features available to you as an Android developer which you can use to create richer interactions in your apps. Example code will be quite concise because I assume you have at least a basic knowledge of Android development. Feel free to leave any comments suggesting how I can better explain these concepts, or to let me know if I’ve made any mistakes or omissions.

What is “multimodal” interaction?

Multimodal interaction, put simply, is interaction involving more than one modality (e.g. multiple senses). For example, an application may provide a combination of visual and haptic (touch) feedback. These types of interaction design provide a number of benefits, for example allowing those with sensory impairment to interact using other senses, or allowing interaction in contexts where one sense may be otherwise occupied.

One of the most ubiquitous examples of a multimodal interaction is the way in which mobile phones combine visual, audible and haptic feedback to inform users of a new text, phone call, etc. This combination of modalities is particularly useful when your phone is, say, in your pocket. Obviously you can’t see the phone, but you will probably feel the phone vibrate or hear your ringtone as new notifications appear.

Using touchscreen gestures to interact with applications can be fun, efficient and useful when users may be unable to select a particular action on the screen. For example, it can be difficult to select a button on-screen when running or walking. A touch gesture, however, is a lot easier and requires less precision from the user. The disadvantage with touch gestures is that if not used sparingly, there may be too much for the user to remember!
Creating a set of gestures for your application is simple: create a gesture library on an Android Virtual Device using the Gesture Builder application (available on the AVD by default) and add a GestureOverlayView to your activity layout. In your activity, you just have to load the gesture library from your resources and implement an OnGesturePerformedListener.

The callback method for gesture performance receives a Gesture as an argument. This can be used to obtain a list of predictions: which gestures in your library that Android thought the gesture was. With these predictions, you can use the prediction score (or contextual information) to determine which gesture the user was most likely to have performed. I find it useful to define a threshold for gesture acceptance, so that you can reject erroneous or inaccurate gestures. The best way to choose this threshold value is through trial and error: see what works for you and your gestures.

Senseg made a splash recently when they revealed their touchscreen technology which allows you to actually “feel” objects on-screen. By manipulating small electric charges, users can actually feel texture as they interact with a touchscreen. It’d be too easy to dismiss this as a gimmick, however I think this type of technology has the potential to make a positive impact on mobile devices.

Yes, touchscreen keyboards are flexible and can offer a variety of layouts, however they still don’t give sufficient physical feedback to allow fast touch typing. One reason we’re better at typing on physical keyboards is because we “know” where our fingers are. The edges of keys (and the raised bumps often found on some keys) provide reference to other locations on the keyboard. Without looking at the keyboard, an experienced typist can type upwards of 100 words per minute. On a touchscreen, without proper physical feedback, you can expect just a small fraction of those speeds.

One argument against that could be the screen size, however tablets suffer from the same problems. The 26 character keys on my keyboard are of comparable size to the virtual keyboard on my 10-inch tablet. A popular approach to providing feedback for a mobile devices is to vibrate upon key press, however this provides little information other than “you’ve pressed a key”. An alternative approach to making touchscreen keyboards easier to use has been patented by IBM; a virtual keyboard that adjusts itself to how users type on-screen. Auto-correct is another feature which has risen to aid the use of virtual keyboards, yet addresses the symptoms rather than the cause.

Enter touchscreens you can “feel”. Actually being able to feel (something which resembles) the edges of keys on a virtual keyboard is likely to make it much easier to type on touchscreen devices. If technology becomes available which allows effective representation of edges (which Senseg claims their technology can), touchscreen devices will be able to offer what is, in my opinion, an improvement to virtual keyboards. I think this could be of particularly great benefit on tabletop computers which, by nature, allow a more natural typing position than handheld devices. Or perhaps this is all just wishful thinking because I go from 110WPM at my desktop to around 5WPM on my phone.